The following is an extract from Light on Yoga by BKS Iyengar.

When oil is poured from one vessel to another, one can observe the steady constant flow. When the flow of concentration is uninterrupted, the state that arises is dhyana (meditation). As the filament in an electric bulb glows and illumines when there is a regular uninterrupted current of electricity, the yogi’s mind will be illumined by dhyana. His body, breath, senses, mind, reason and ego are all integrated in the object of his contemplation – the Universal Spirit. He remains in a state of consciousness which has no qualification whatsoever. There is no other feeling except a state of SUPREME BLISS. Like a streak of lightning the yogi sees LIGHT that shines beyond the earth and the heavens. He sees the light that shines in his own heart. He becomes a light unto himself and others.

The sign of progress on the path of Yoga are health, a sense of physical lightness, 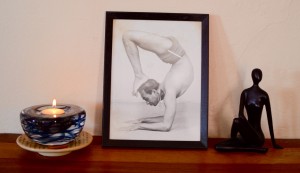 steadiness, clearness of countenance and a beautiful voice, sweetness of odour of the body and freedom from craving. He has a balanced, serene and tranquil mind. He is the very symbol of humility. He dedicates all his actions to the Lord and taking refuge in Him, frees himself from the bondage of karma (action) and becomes a Jivana Mukta (a Liberated Soul).

‘What becomes of him who strives and fails to reach the end of Yoga, who has faith, but whose mind wanders away from Yoga?’ To this query of Arjuna, the Lord Sri Krishna replied:

‘No evil can befall the righteous man. He dwells long years in the heaven of those who did good, and then he is reborn in the house of the pure and the great. He may even be born in a family of illumined yogis; but to be born in such a family is most difficult in this world. He will regain the wisdom attained in his former life and strives ever for perfection. Because of his former study, practice and struggle which drive him ever onwards, the yogi ever strives with a soul cleansed of sin, attains perfection through many lives and reaches the supreme goal. The yogi goes beyond those who only follow the path of auterity, knowledge or service. Therefore, Arjuna, be thou a yogi. The greatest of all yogis is he who adores Me with faith and whose heart abides in Me.’ Bhagavad Gita, chapter VI, verses 38-47.

See Wikipedia for further information about dhyana in Hinduism.